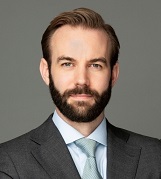 Mr. Clarke advises corporations, financial institutions and individuals across multiple sectors on the monetization and dilution of high value claims, financial instruments, judgments and arbitral awards (including for and against sovereign states). His cases frequently require the formulation of global strategies, which often engage issues of contested jurisdiction, conflicts of law, interim relief, disclosure and state immunity.

He has been based in the Middle East for over seven years, with a particular expertise in asset recovery, corporate disputes and the jurisdiction of the Dubai International Financial Centre (DIFC) Courts. He has been recognized by the Legal 500 as a “star in the making”, with “good legal judgment”, and having “made a major impact in the region”.

He has acted in complex litigation brought to forums including the Commercial Court in London, DIFC Courts and Court of Justice of the European Union (CJEU). In addition, his international arbitration portfolio includes claims and awards rendered under many of the major arbitral institutions and rules (ICC, LCIA, DIFC-LCIA, DIAC, ICSID, HKIAC, UNCITRAL and LMAA).

“Richard Clarke shows great promise as a very able administrator of any major piece of litigation. He has good legal judgement.”

“Richard Clarke is a star in the making and has made a major impact in the region.”