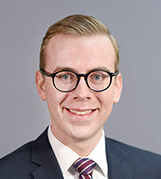 William Weightman, under the supervision of the firm's lawyers, specializes in matters involving cross-border disputes and investigations with a focus on the People's Republic of China. He also has significant experience conducting trading and economic analyses for federal criminal cases alleging fraud and spoofing in precious metals futures markets.

Previously, Mr. Weightman was a Fulbright Fellow based in Chengdu, China where he researched China's intellectual property (IP) rights system as well as judicial enforcement in the specialized IP courts and tribunals. His analyses have appeared in the China Business Review, The Diplomat and East Asia Forum, and his commentary has been featured in the Financial Times, CNBC, Bloomberg and China Daily, among others.

Mr. Weightman recently assisted with the representation of a Chinese state-owned enterprise in the technology sector in challenging a regulatory action by the U.S. Commerce Department. He has also provided assistance with a matter where the firm serves as the integrity compliance monitor of a large public-listed Chinese technology corporation in connection with its debarment by the World Bank.