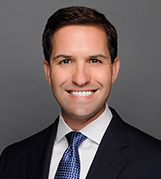 Before joining Kobre & Kim, Mr. Couriel served as a prosecutor at the U.S. Department of Justice (as an Assistant U.S. Attorney in the Criminal Division of the U.S. Attorney's Office for the Southern District of Florida), where he prosecuted significant wire fraud, money laundering, healthcare fraud, and other conspiracies, including in cases involving cross-border prosecutorial cooperation and extradition matters.

Prior to his time as a prosecutor, Mr. Couriel practiced with Davis Polk & Wardwell LLP, where he focused on cross-border internal investigations, white-collar and regulatory enforcement matters, and multijurisdictional complex commercial disputes.

After law school, Mr. Couriel clerked for the Honorable John D. Bates of the U.S. District Court for the District of Columbia.

He is “a really brilliant strategist and an excellent courtroom advocate.” - Chambers